TR-069 (Technical Report 069) is a Broadband Forum (formerly known as DSL Forum) technical specification entitled CPE WAN Management Protocol (CWMP). It defines an application layer protocol for remote management of end-user devices. As a bidirectional SOAP/HTTP-based protocol, it provides the communication between customer-premises equipment (CPE) and Auto Configuration Servers (ACS). It includes both a safe auto configuration and the control of other CPE management functions within an integrated framework. The protocol addresses the growing number of different Internet access devices such as modems, routers, gateways, as well as end-user devices which connect to the Internet, such as set-top boxes, and VoIP-phones. The TR-069 standard was developed for automatic configuration and management of these devices by Auto Configuration Servers (ACS). 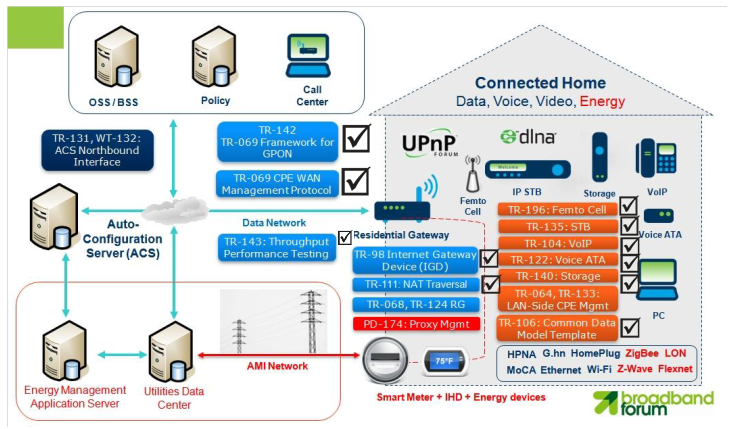 CWMP is a text based protocol. Orders sent between the device (CPE) and auto configuration server (ACS) are transported over HTTP (or more frequently HTTPS). At this level (HTTP) CPE is behaving in the role of client and ACS in the role of HTTP server. This essentially means that control over the flow of the provisioning session is the sole responsibility of the device

All communications and operations are performed in the scope of the provisioning session. The session is always started by the device(CPE) and begins with the transmission of an Inform message. Its reception and readiness of the server for the session is indicated by an InformResponse message. That concludes the session initialization stage. The order of the next two stages depends on the value of the flag HoldRequests. If the value is false the initialization stage is followed by the transmission of device requests, otherwise ACS orders are transmitted first. The following description assumes the value is false. In the second stage, orders are transmitted from the device to the ACS. Even though the protocol defines multiple methods that may be invoked by the device on the ACS, only one is commonly found - TransferComplete which is used to inform the ACS of the completion of a file transfer previously issued Download or Upload request. This stage is finalized by transmission of empty HTTP-request to the ACS. In the third stage the roles change on the CWMP level. The HTTP-response for the empty HTTP-request by the device will contain a CWMP-request from the ACS. This will subsequently be followed by an HTTP-request containing a CWMP-response for the previous CWMP-request. Multiple orders may be transmitted one-by-one. This stage (and the whole provisioning session) is terminated by an empty HTTP-response from the ACS indicating that no more orders are pending.

As vital data (like user names and passwords) may be transmitted to CPE via CWMP, it is essential to provide secure transport channel and always authenticate the CPE against the ACS. Secure transport and authentication of the ACS identity can easily be provided by usage of HTTPS and verification of ACS certificate. Authentication of the CPE is more problematic. The identity of the device is verified based on a shared secret (password) at the HTTP level. Passwords may be negotiated between the parties (CPE-ACS) at every provisioning session. When the device contacts the ACS for the first time (or after a factory-reset) default passwords are used. In large networks it is the responsibility of the procurement to ensure each device is using unique credentials, their list is delivered with the devices themselves and secured